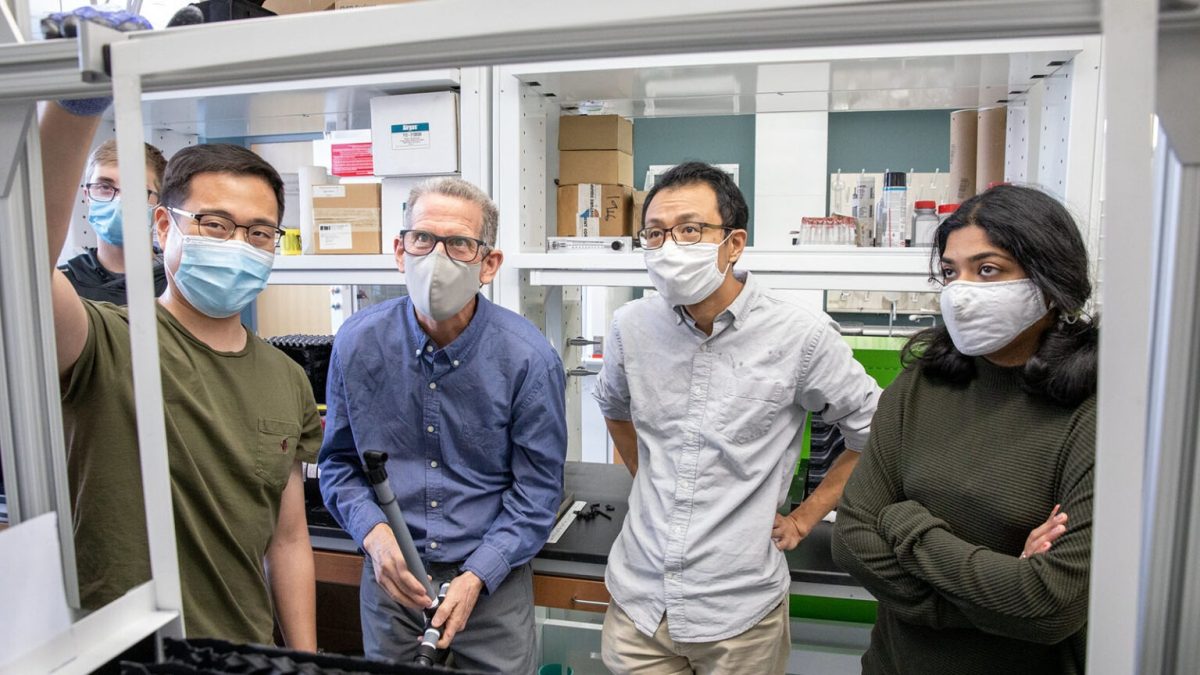 For a planet increasingly ravaged by the effects of climate change, removing carbon from the atmosphere could be part of a desperately needed turn in the right direction.

Innovators worldwide participating in the XPRIZE Carbon Removal competition are racing to develop technologies that can harvest that carbon dioxide efficiently and lock it away. Now, from an initial field of more than 500 entries, competition judges have chosen a University of Wisconsin–Madison team’s solution among the most promising.

The team, Earth RepAIR, was among the top-60 groups, and in the top-eight of 21 teams focusing on direct air capture, in the XPRIZE competition, a $100 million global challenge funded by Elon Musk and the Musk Foundation. The challenge is aimed at fighting climate change and rebalancing Earth’s carbon cycle—a critical need for action underscored in an April 2022 report issued by the Intergovernmental Panel on Climate Change. The multiyear, multistage competition concludes Earth Day 2025.

Teams eligible for the milestone award were required to demonstrate a working carbon dioxide removal solution, estimate its cost at full scale, and develop a plan for scaling and deploying their solutions at the megaton- and gigaton-per-year capacity. As a top-60 team, Earth RepAIR will receive support in a variety of areas, including legal, business, investment, demonstration sites and others, from XPRIZE.

Teams eligible for the milestone award were required to demonstrate a working carbon dioxide removal solution, estimate its cost at full scale, and develop a plan for scaling and deploying their solutions at the megaton- and gigaton-per-year capacity.

The team harvests carbon dioxide from the air via a simple chemical reaction. Essentially, they blow air over a solution of the chemical hydroxide and capture carbon in the form of carbonate ions. Next, in a method patented by Wang, they combine the carbonate solution with coal ash, which converts the captured carbon dioxide into fine limestone and activated silica particles; those can be upcycled into cement. Hydroxide is a byproduct of that carbonation step, and the team recycles it back through the system, where it’s used to capture more carbon dioxide.

Existing technologies require an energy-intensive intermediate step to concentrate, or purify, the captured carbon dioxide before it can be transported, sequestered underground, converted into rock, or repurposed for commercial or industrial use.

The UW-Madison process circumvents the need for that processing step. It also works with a wide range of carbon dioxide concentrations. “We can directly turn carbon dioxide into rock, without using pure carbon dioxide,” says Wang, who also is a fellow of the Grainger Institute for Engineering at UW–Madison. “We can even do it with carbon dioxide that’s super impure, like air. By doing that, we can couple the two steps together—so we use the second sequestration step to remove the energy need from the first step. It’s a one-way situation, and the whole process just happens naturally.”

In fall 2021, Earth RepAIR also earned $250,000, the largest available award in the XPRIZE student competition. The funding, along with support from the Wisconsin Alumni Research Foundation at UW–Madison, enabled team members to advance the technology so that it can efficiently and effectively capture a gigaton of CO2 with the lowest cost possible. That also includes working with a third-party company to verify their system works.

Now, in addition to their XPRIZE winnings, team members are forming a company and actively seeking additional funding from venture capitalists and other sources, says Keerthana Sreenivasan, a graduate student in Wang’s group who led the student team.

Although Sreenivasan soon will graduate and begin a consulting engineering position in solid-waste management, she and the other students still plan to help move Earth RepAIR forward—not only as a company, but also as a contender for $80 million in grand prizes from XPRIZE. “All of the students who are involved in our project are sustainability-focused,” she says. “Everyone has that goal that we can and we should do something about what’s happening to the earth and everyone believes in our project and our technology.”

At the moment, the Earth RepAIR demonstration system resides in two UW–Madison laboratories. However, the team aims to scale up quickly, says Anex, who also is an investigator with the Wisconsin Energy Institute at UW–Madison. “We will build a 1,000-ton-per-year plant that will be running by hopefully the middle of 2023,” he says.